A Mountain of Aluminum

Last Friday, museum Beelden aan Zee presented an impressive sculpture by the British-Indian sculptor Anish Kapoor: Mountain. A mountain thus, executed in aluminum. And of magnificent proportions too. If you aren’t already impressed by the mountain’s looks, you should at least have some sense of admiration for the way it was made – and the way the whopper ended up in the museum.

It’s okay to sympathize at times, with the employees of museum Beelden aan Zee. Because this is the museum where the curators don’t call an art handler for transportation in an airconditioned minivan; they call Mammoet for a trailer and matching crane. Last Friday, Beelden aan Zee presented an art work by Anish Kapoor that is equally impossible: a mountain of aluminum. Two and a half metre high, five metre wide. Weight: six tons. A blessing in disguise that it didn’t arrive in one piece, but as a construction kit with 1.000 elements and 10.000 screws. The mountain consists of 120 layers of aluminum, each two centimeter thick and mounted onto an armature. Assembling it took forever, during which IKEA jokes came thick and fast according to head of collection management Dick van Broekhuizen.

The result is an impressive object; unmistakably a mountain, but then a very steep one, that no mountaineer would ever venture upon. Nevertheless, you can undertake a climb as a visitor: through a special staircase, you can also experience the mountain from the top – and you can look into it from above. An obligatory challenge actually, because the mountain appears as a massive piece of stoicism from below, while a sinister void awaits you upstairs. An amazing contrast.

In case you are impressed by this mountain to the extend that you’d like to have it in your own living room: it’s possible. This unique Kapoor can be yours for 1.25 million euro (shipping not included). Beelden aan Zee has the mountain on loan for a year – but according to director Jan Teeuwisse, the museum would love to buy the work. They already have a spot in mind: the atrium-like outdoor space in between the small gallery and the offices. From there, you can walk around it downstairs and look into it from the deck upstairs. Won’t it rust away due to the wheather? Dick van Broekhuizen doesn’t think so. But as long as the work is on loan, the museum won’t be taking the risk. The work is safely indoors for the time being, in a sheltered corner of the large gallery.

Comments on A Mountain of Aluminum 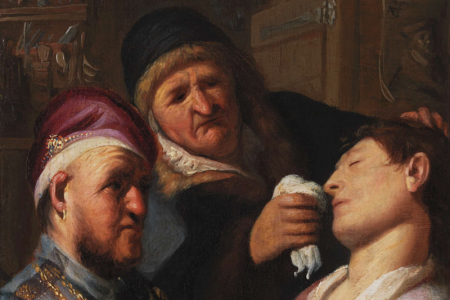 Tefaf 2016 - 10 Highlights
Of course, the 'new' Rembrandt is one of the absolute highlights of The European Fine Art Fair (Tefaf) in Maastricht. But there is much more to discov... continue reading >
Try See All This Magazine
1 year for € 49,95-
Save 20% compared to buying single issues!