What the eye tells you

The average museum visitor looks at a painting for less than half a minute, recent research has shown. That is 1,43 seconds longer than in 2001 – but that rise is mainly ascribed to the time it takes for a visitor to take a selfie with the artwork. Writer Cees Nooteboom undoubtedly looks for longer. In his new book Wat het oog je vertelt (What the eye tells you) he shows you what real looking is like. 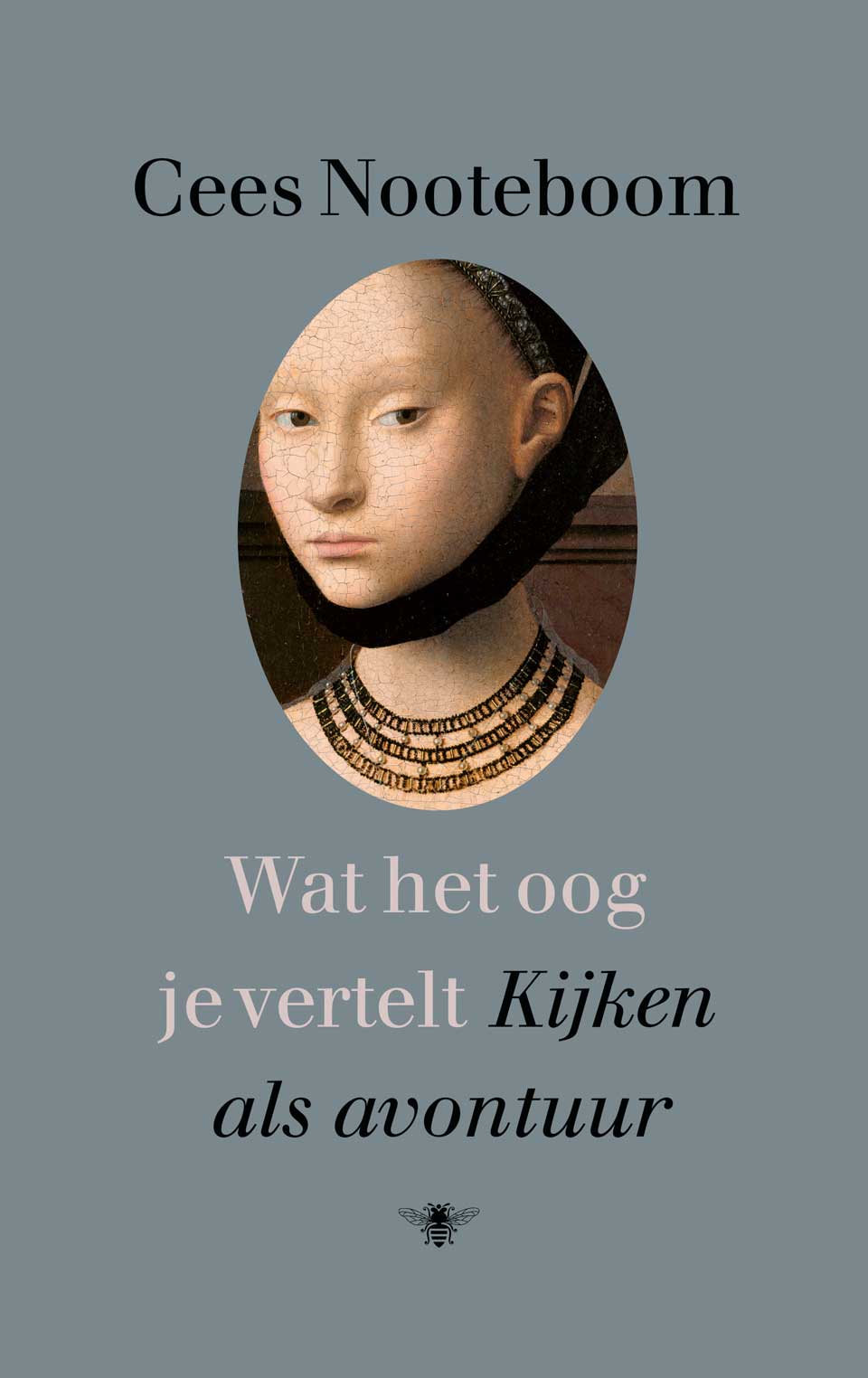 Ever since the early fifties, he traveled the world, looking for the images and stories that make up our culture. Those images and stories were brought together in this new, comprehensive book. The book is a mouth watering read – the combination of Nooteboom’s travel reports and the stories about artworks and exhibitions that he saw all over the world is contagious. Especially because Nooteboom is never absent; his role as spectator of an artwork is as big as the maker’s. For interpretation is in the eye of the beholder – and it’s that aspect precisely that Nooteboom knows how to describe beautifully. In a way that evokes the desire to go and stand in front of an artwork and look endlessly.

Below is an excerpt from Wat het oog je vertelt, in which Cees Nooteboom invites the reader into the world of Edward Hopper.

There’s a bar next to my hotel in Brooklyn that I always wander into at night, before I go to bed. It’s a game between me and the bartender. Not more than one sentence has ever been exchanged in it, but we’ve played it eight times so far. Edward Hopper painted the bar, an ellipse around which the regulars are draped every night in the same way, the posh negro in his houndstooth, the lonely drunkard who curses every now and then, the sloppy lady with the hat, a couple of Irish gamblers who play Sinatra every night and then sing-along, and in the middle of all that, surrounded by his bar like an island by the sea, is the bartender. Further down, the space fades to utter darkness in which sometimes, whenever someone goes to the bathroom, a flash of neon lights up and illuminates an underworld, the television is on and no-one watches except for when there is a fight, and the jukebox emits colours that are excluded from Goethe’s colour theory. The first time that I enter, unaccustomed to the pitch blackness, the bartender acts like he doesn’t see me. That initiates it. I can’t yell (shyness, bad habit for a traveler) and I try to place my face in a poor light spot so that I’d have to catch his eye. I hear his name is Eddy. He is busy with his bottles, jokes around, narrowly passes my looks, but I am invisible. Sometimes I raise my arm, after that only a hand, but he only comes when I, really gently, raise just my finger. Confused, I suddenly can’t remember what I wanted to order and I take something that I haven’t had in years, a bourbon on the rocks.

‘Harpers or Grand Dad?’
‘Harpers.’
As soon as he puts it down I ask for a ‘soda on the side’. He gives me one of those glasses that have a floating iceberg in them, and from that moment on, the ritual was established. I raise my finger, he puts down the brown and transparent twins. Not just that night, any night. Even if I was to feel like something else a hundred times, it would be out of the question: as soon as my shadow appears in the doorway, a bourbon is presented. It gives me a sense of intense protection. This foolish Irishman with his sloping potbelly and his almighty, ironic look about him has become the only steady moment of my days. If I return to this hotel in twenty years time, a bourbon is ready for me. And a soda.

‘The nucleus around which the artist’s intellect builds his work is himself: the central ego, personality or whatever it may be called, and this changes little from birth to death.’ Edward Hopper, who died in 1967 at the age of eighty five, was frugal with words, but when he spoke it was essential and clear.

The assertion above can easily be validated at the big retrospective at the Whitney museum. Quite brutal actually, such an infinite painter’s life brought together in a few galleries. While skills are constantly evolving, the central theme remains the same: the internal vision of Edward Hopper on the rest of the world – America in his case. And that is a tragic vision, or rather, my interpretation of it is tragic. Even when he leaves out the people, there is something fatal in the decor – landscapes, townscapes, lighthouses, tunnels, as if those things want to mean more than what they are, an underlying element of grief, melancholy and massive isolation, absent and invisible in regular reality.

Some painters discover a light for themselves, a light that doesn’t exist in nature. That light is what they think about the world, how they see the world. The onlooker cannot withdraw from that. What he sees is no more than a house or a lighthouse somewhere at Cape Cod, no, it’s a house that once existed somewhere in ‘reality’ but that was abstracted from that by immersing it in the light (= the thought) of Edward Hopper. That self-invented light has a way of outlining objects and illuminating them, so that those objects, a house, a bar, a gas station – are undone from the ‘regular’ way in which they are seen by a passer-by. They are engrained by soul, no longer testify to their existence, but to the soul of the man who painted them, and that soul has an uneasy relation with nature or whatever passes for it. Water becomes solid with Hopper. The sky is behind the horizon like a vertical plate. The houses are inclined by it. The water in the harbor clotted in such a way that it seems like the boats froze on to it. Am I carefully looking, or is it my own soul, that, maybe just as constructed, or influenced by Hopper’s, is adding another layer of tragedy?

One of the paintings is titled People in the Sun. The title is bright enough, but the group that is sitting there mouse-still seems to be waiting for Godot long before Beckett had given him a name. They sit there, frozen, like enemies, not facing the sun but a blue mountain group that viciously rises up behind yet another flat, wheat-coloured plane. Western Motel: the bed, the lamp, the two suitcases, the green car waiting and ominous – as if it is someone – in front of the window. The effect of threat comes from the light that turns the hills outside into a mass, a battle-array. Road and Trees no longer contains any people. It’s unnecessary: the threat is all the same without us, as something that threatens itself, an independent element.

One of the most mysterious paintings is Morning Sun. A woman wearing a salmon pink slip sits on a bed that the blankets were taken off of. The window is open, we are in a city. We? But who are we then? We don’t appear in the painting, there is only that woman. But this side of the painting, the side where the painter must have stood and where we are standing too – because he painted the woman, is open. That is impossible of course: a wall should be in the position of the open place in the painting. The woman is there alone: the entire expression in her face points at that. That’s the mystery. She’s alone and not spied on and looks outside and yet we see her and look into a closed universe. That is not only mysterious, but frightening too. The light that is coming in through the open window and casts itself in a five-degree-angle on the other (but there is only one) wall, is on the bed. If you look at that empty light plane you see how autonomous it is. It can fly away to a drawing of Henneman or nestle itself in a painting by Malsen. It actually did at some point, but it must always come back here, the woman will always cover the lower corner of it, and she will sit like that, visible in her invisibility with her slightly La Goulue-like face, casting her own green shadow on the sheets behind her, catching the sun from elsewhere with her arms, her breasts, her thighs.

Walking away from the painting I know that something is still bothering me. I know what it is too, but the thought of it refuses to clarify: the woman doesn’t have a name. After that, it’s only one step to say: it’s a nameless, but that word is as loaded as a curse, as if it is a dangerous thing not to have a name. Maybe that’s what it is: a dangerous painting.

Comments on What the eye tells you