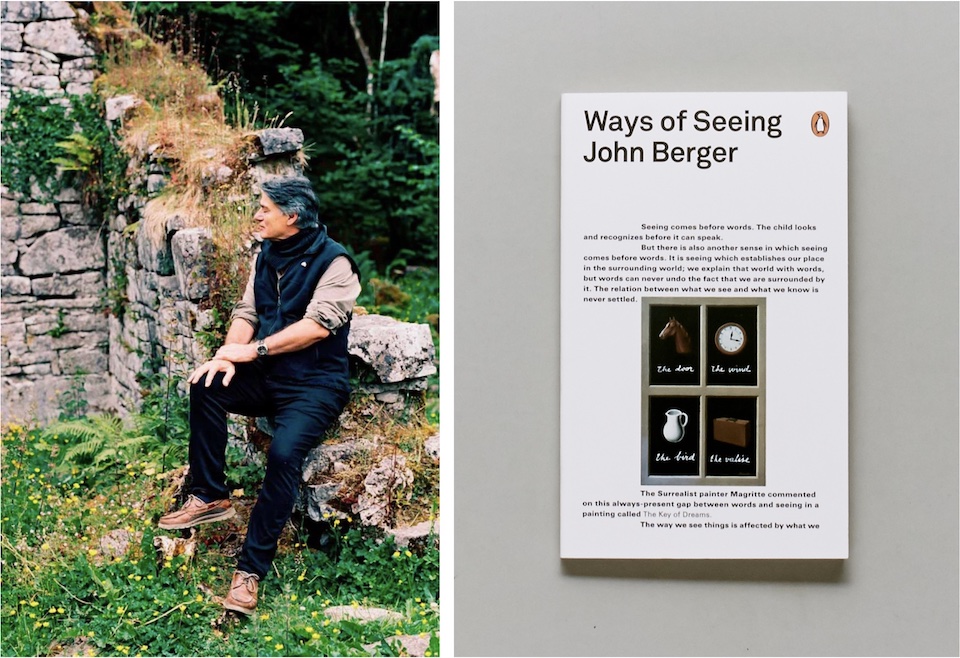 See All This #27 will be celebrating 50 years of the late British art critic John Berger’s iconic ‘Ways of Seeing’. How much do you know about Berger?

‘I am familiar with Berger’s ideas on the male gaze, his political views and also the work of Walter Benjamin that influenced him.’

John Berger gave us all a new way to look at the world. As a seasoned traveler what is something you’ve seen, in art or nature, that has left a lasting impression on you?

‘Growing up I always felt ravished by landscapes and physically overwhelmed by them in a beautiful way…Very similar to the descriptions you find in William Wordsworth’s poetry about his experiences.

The landscape was always coming to find something larger than my personality. I experienced that in a very magnified form when I went, as a young marine zoologist, to the Galapagos Islands. That environment was constantly coming to find a much fiercer, wilder, more fearsome I would say, version of myself. Beyond human social concerns in a way. So that was quite a scary place to be in my young twenties but a very good place to be. I was a guide and we spent much of that time just watching and looking in deep silence.

I recognized years later in my Zen sitting meditation, these moments of inhabiting a greater identity. The real discipline is to remain in that greater identity and to sustain that sense of presence. In the Galapagos it had to do with letting go of the names of things. Which is ironic because part of my interview process for getting the job in the Galapagos was being shown bird after bird, animal after animal and having to name them. But actually one’s work there was rather to enter people into the conversation about essence, where you see the essence of marine life, its movement, the shape it made in the environment. Something that affects you very deeply when you allow yourself to watch and deepen that attention.

If you were to have a title for this interview it would not be ‘Ways of Seeing’ it would be ‘Ways of being seen by the world’. As in all great contemplative traditions, the most nourishing thing you can do is to pay deep attention to the world, but it will also break your life apart, because the fixed identity that had named the world and wanted it to be a certain way, in order to prevent us from experiencing heartbreak, is found to be too small. To name is a smaller way of seeing.’

So truly seeing is about knowing yourself? Most people might find that quite a daunting task…


‘We paradoxically try to know ourselves by using the same descriptive, strategic part of the mind that is afraid of knowing itself. Our way of staying safe is to assign names to what in fact cannot be named. It is the precise  reason why poetry is so difficult to write. Because you’re actually going to the part of you that doesn’t know what to say.

As a young poet you tend to think ‘this excites me’, ‘that has to go into the world’, ‘I have to let it out’, but no, you are going to go to a part of you that radically doesn’t know and you are going to pay attention and observe from that place. Then at that meeting place between what you think is you and what you think is not you, that is where the conversations happen. And when you speak that conversation out loud it comes out as poetry. But it is the same as in an intimate relationship. It is the same undoing of your surface personality. We all know that you cannot have an intimate relationship without vulnerability.’

In your opinion, is vulnerability then the same as honesty?


‘Honesty and vulnerability are aligned. When I am honest with you, I am going to fire a piece of ammunition at you. If anyone says: Can I be honest with you… [laughs]. The Dutch are incredibly honest. No, honesty is joining in a mutual exchange of what is not yet fully understood. Vulnerability is the invitational axis along which all conversations deepen. When you think about it there is no real conversation without vulnerability.

This dynamic of being seen by the world is in all our great traditions. Spanish poet Antonio Machado: an eye is not an eye because you see it, an eye is an eye because it sees you. In other words, everything has a living faculty to perceive you. This is very powerful in every great religion and all our contemplative traditions. Your reaching enlightenment actually has nothing to do with you. It’s about allowing yourself to be fully seen and heard. In the Zen traditions of the 13th century: if you go out and confirm ten thousand things, this is considered a delusion, because you have named everything. When ten thousand things come forth and confirm you, this is enlightenment.

So how does one perceive the essence of things? What do you pay attention to when seeing?

‘Coming out of my own poetic traditions, I look at everything in the same way. I look at people or listen to people – listening is a deep form of looking, perhaps the most generous form of looking – I am looking at something to see what it is saying to me, without imposing  a voice upon it. A lot of the voices we hear from people are projections, especially from our spouses, our husbands or wives. It is projecting into their words the things we want them to say. It’s a radical act to leave your intimate partner alone, so you can actually feel, hear, see what is coming from them towards you.

Recently, I went for a walk along the canal in Oxford. Something which has become my late night ritual, I was just walking, listening and trying to get into that deeper state, where everything is inviting you in to meet and to speak. You know it is a cliché about the miraculous nature of reality, but it actually is miraculous. Just the simple act of seeing, being able to perceive the colour blue is a miracle, or imagine the colour blue, this is a miracle. To hear the laughter of your daughter. They are all gifts, they don’t have to lead you anywhere except deeper into the miracle of the fact that you can hear or see them.’

So we need to look less in order to see more? And do it quietly?


‘The implication of truly seeing is that the rest of the world must be perceiving the miraculous in you. Which is quite humbling. The only place to hold that sense of miraculousness without ego is in silence…’

John Berger said that we never look at just one thing, we always look at the relation between things and ourselves. Do you agree? That we all possess our own, personal way of seeing?

‘Yes, in the Galapagos we reached  that threshold of attention and I started to numerate them to myself. The first step is no attention at all, no seeing, you’re caught up in your own problems. You see everything as a possibility for further complaint. The next step is just noticing, literally just noticing things other than yourself: oh, that knocking on my door is different from how I am knocking on my own door.

The third step is deepening the attention until it takes you out of yourself. Suddenly there is this radical other and there is you and then the energy starts moving almost like a trapeze artist at the circus. That is as far as John Berger gets as far as I am concerned with his ‘between things’, because there is another stage where what you’re looking at and what is looking at you, both break down. This alchemical melding in this meeting in which your world and you are blown apart. The word ‘oneness’ has become a cliché, so I never use the word oneness. As a poet you can’t use oneness [laughs], it’s too new age, but that is the experience.’

Is it more difficult to, say when you live in a big city, achieve a deeper manner of seeing, in the way that you’ve described it? How heavily do our surroundings play a part in the way we see?

‘William Blake would say, no it is not. But he was a radical genius. There are more distractions in the city. All the shop windows you pass by, saying “buy me, buy me”. Perhaps once you have established a relationship with silence, with deep seeing and listening, then you can live in the city in a way in which you are not harmed by the constant contraction, but I think it is more difficult. There is a reason why monasteries are quiet places. There is a reason why artists go to quiet places, even when it is just a quiet room to create.’

Do you feel that your own way of seeing has changed throughout the years? What do you fall back upon? How do you apply it in your own work?

‘When we are very young, if we are lucky, we have an unmitigated visionary experience which I still remember. You remember reading an adult poet for the first time and realizing: oh, these are adults who have kept the visions of childhood alive into adulthood. So often as a child when you were listening to what adults were talking about and what their priorities were, then you would say to yourself: these people are insane, they have forgotten what is priority and what is straightforwardness. So part of it is both recovering the initial visions of youth. And Wordworth’s work is a lot about that, so is Emily Dickinson’s. It is this absolute lack of boundary between the self and the world. And then the amusement in a way of re-establishing, of disappearing in, the cycles of human experiences. So part of it is the recovering of the visionary experience we all had as children and part of it is deepening that vision with the maturity of adult responsibilities and understanding how difficult life is.

Gaining compassion is why adults become insane, because there is so much heartbreak and loss in the average human life. Every human being has the right to turn away from it and say: I am not doing that, thank you very much. I am just getting to make my own little world up and I am going to make my own rules up too. And there are things I am not going to look up, and there are things I am not going to listen to because it is just too painful. So the art of poetry is making people see and against their defensive pre-conceptions. It is creating language against which there are no defenses. So you could say it is creating a mode of seeing in which you cannot look away.’ 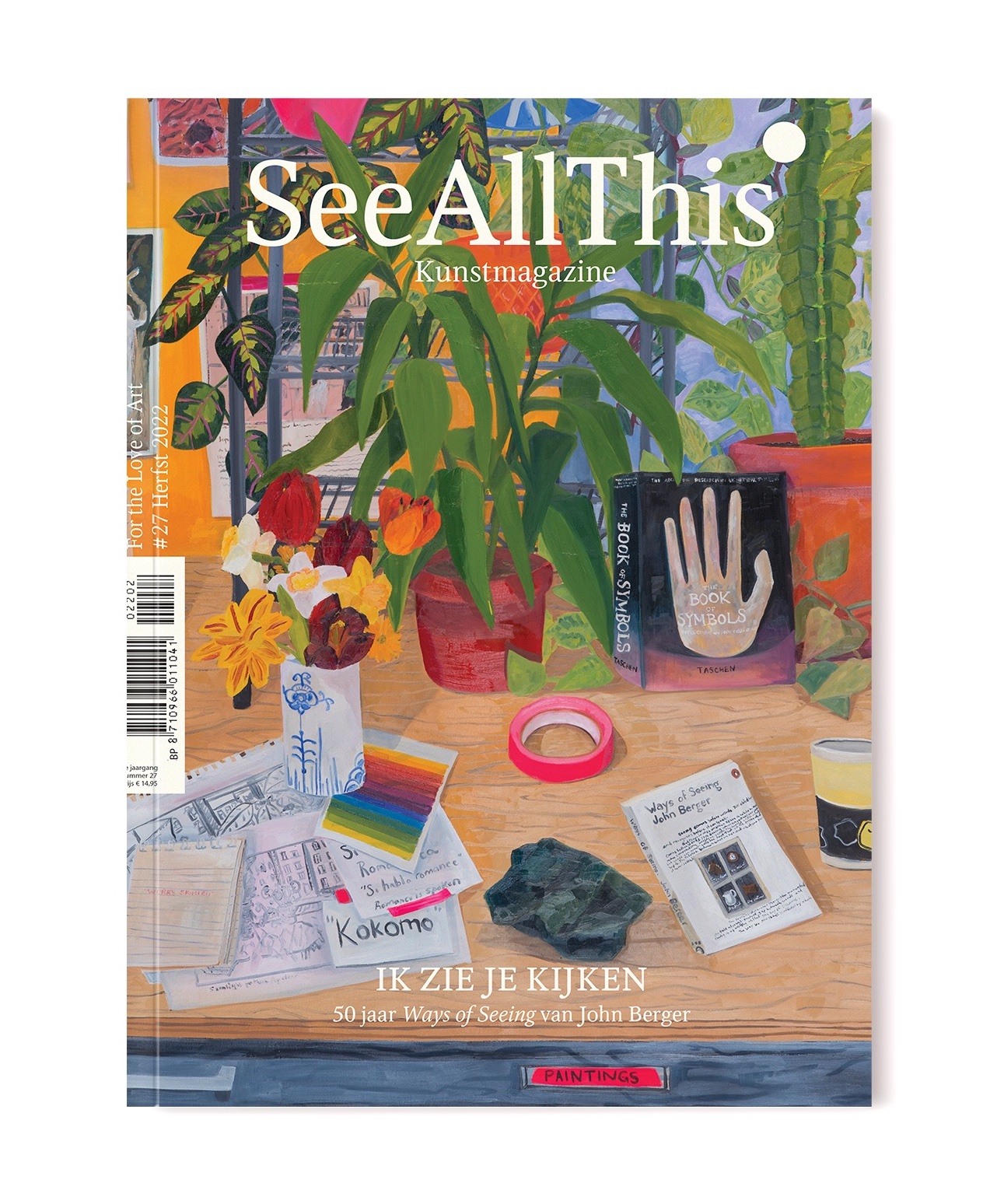 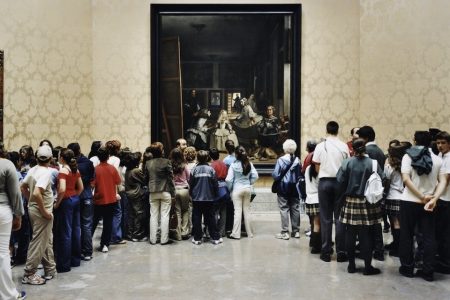 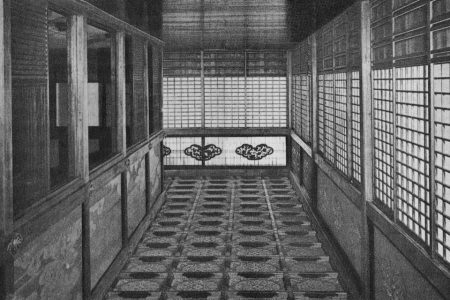 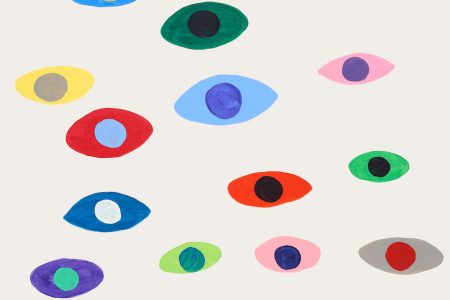