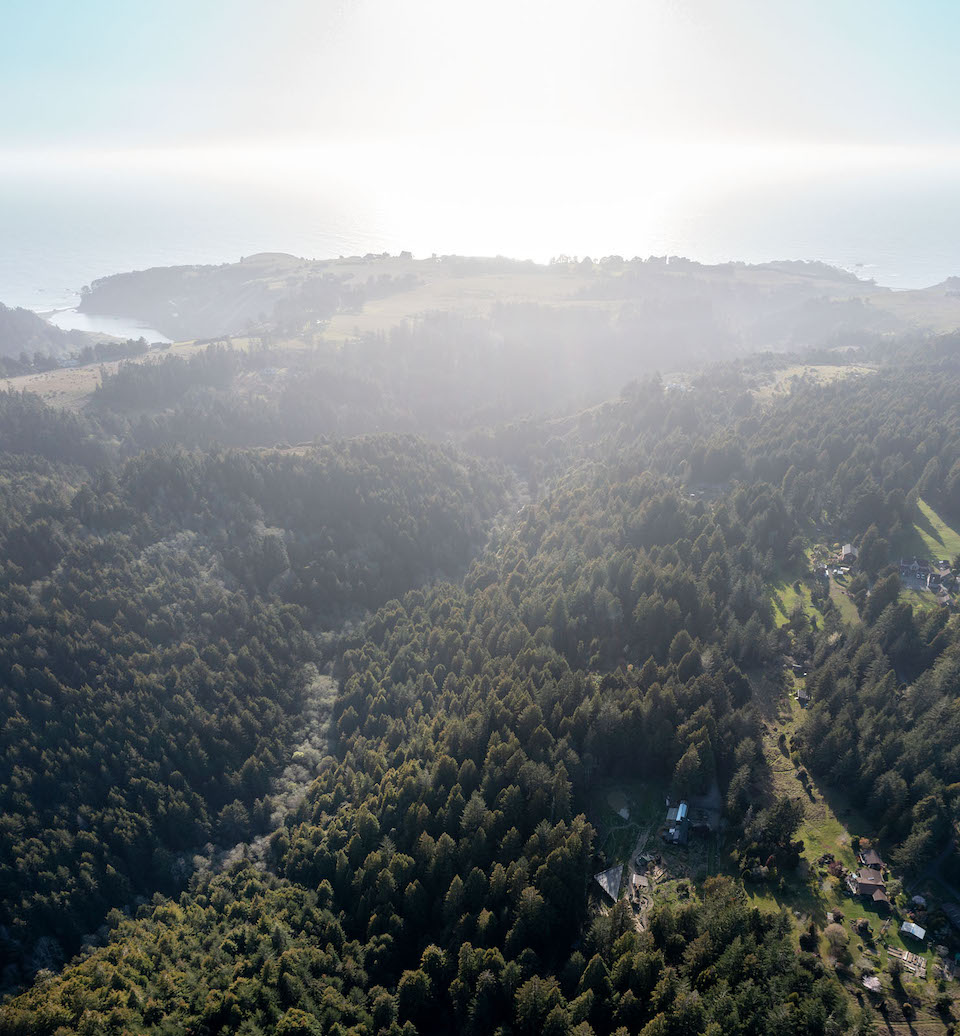 ‘I spent around a decade traveling, as you do when you’re an artist these days, at least before covid. I was traveling constantly to big cities for projects and lectures. I didn’t have a studio, I made installations on site, so I had this life that was very urban, very itinerate. During these ten years of traveling, I was fixated on the idea of finding a piece of land to settle down on, long term. To plant trees, to take care of a piece of land, as long as I am around, and to sustain some kind of durational connection to it. I had done so many projects with gardening, rewilding, urban wild life, and ecology, that were confronting the city. But I think that personally, I really wanted a life that was more rooted.

I was looking for a place that had history, that had a legacy. It wasn’t my intention to come to a virgin piece of land and impose my vision. I wanted to pick up where someone left off, at a place where there could be a community, I didn’t want to be alone in the woods. Eventually this property of the Salmon Creek Farm came up. It had been in the market for a few years. And immediately, upon seeing pictures, I was like it had contracted up in a dream or something. I was so perfectly what I was ready for.’ 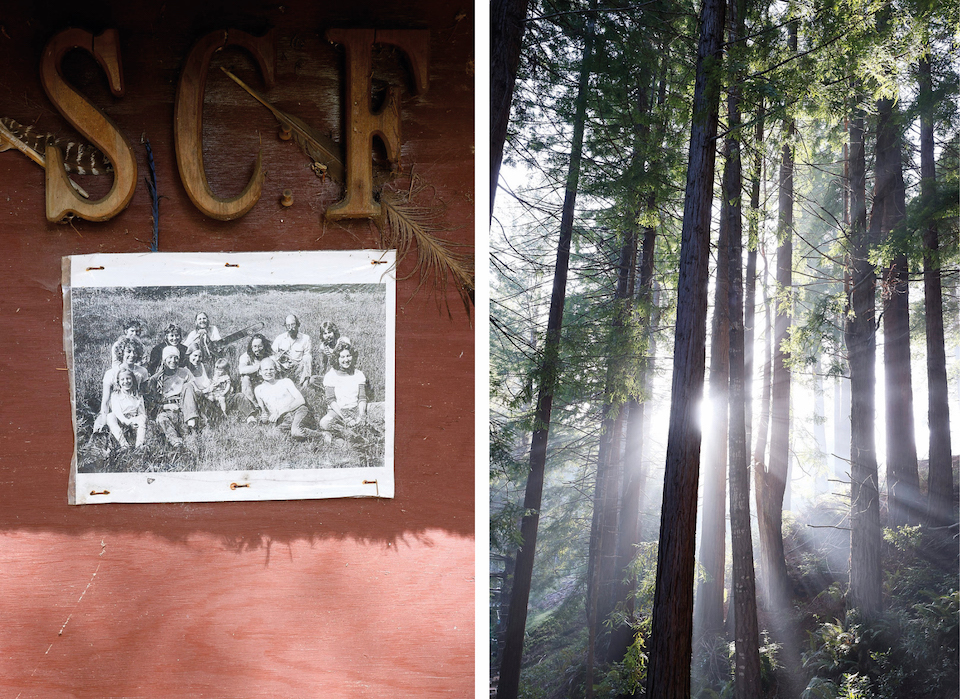 ‘The Salmon Creek Farm is a hippie commune founded in the 1970s, of which there were many in the north of California, near the Mendocino coast. It was founded and built by people in their twenties, maybe early thirties. People who were disillusioned with mainstream and the war, and who were supporting the environmental movement, women’s rights, gay liberation, civil rights, anti-consumerist, anti-… just you know, very disillusioned with the system. And this was global. This was the biggest migration mass from urban to rural in the history of humanity. It was profound. And there was this entire generation of people trying to start over, and just pull out and imagine something else.

The Farm is 35 acres in the coastal red woods. The former communards built their own cabins without power tools, out of scavage materials, with no previous skills. It existed as a functioning commune for almost twenty years. In the late eighties the commune resolved, they rented out their cabins for very little, to individuals, just living alone in the woods. There are eight cabins, there are even a few more little ones they found in the woods, that are left abandoned, that are off grid.’ 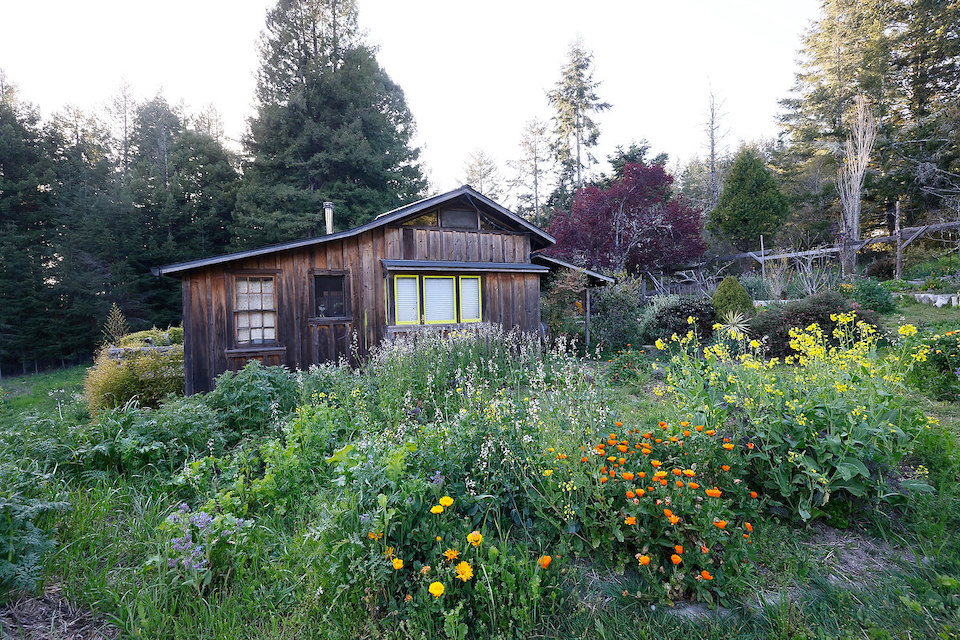 ‘What drew me to it, apart from the just the beauty of the land and the buildings, was this legacy, which was easy to romanticize, but there is something beautiful about this idea of what they were looking for. I feel like a custodian of the land, knowing there was something going on before me that was very thoughtful and special. It’s now in my hands and I am taking care of it, and the intention is that it will exist after me and will continue to be Salmon Creek Farm in some incarnation.

It’s a very special landscape. There are coastal red woods that grow almost nowhere on the planet. Just a few miles inland from the northern Californian coast, from the bay area up to southern Oregon. They are very special trees. They are some of the biggest, oldest living things on the planet. But this whole area, almost all of the redwoods, all of the first growth, were logged to the ground in the late eighteen hundreds, and then again, on this land in the fifties, so it’s a landscape that was traumatized deeply by clear cutting. Trees grow back, but its just a vague shadow of what was here before. So it is a deeply traumatized, humanly created ecological catastrophe, the loss of these virgin woods. Once humans have such a strong hand in a fragile ecology like this, they have a permanent place, a permanent role to kind of constantly prepare or remediate what happened. You could not just say, oh, let’s just go wild, that’s actually not healthy for these woods. They need tending and thinning, things I’m still figuring out.’ 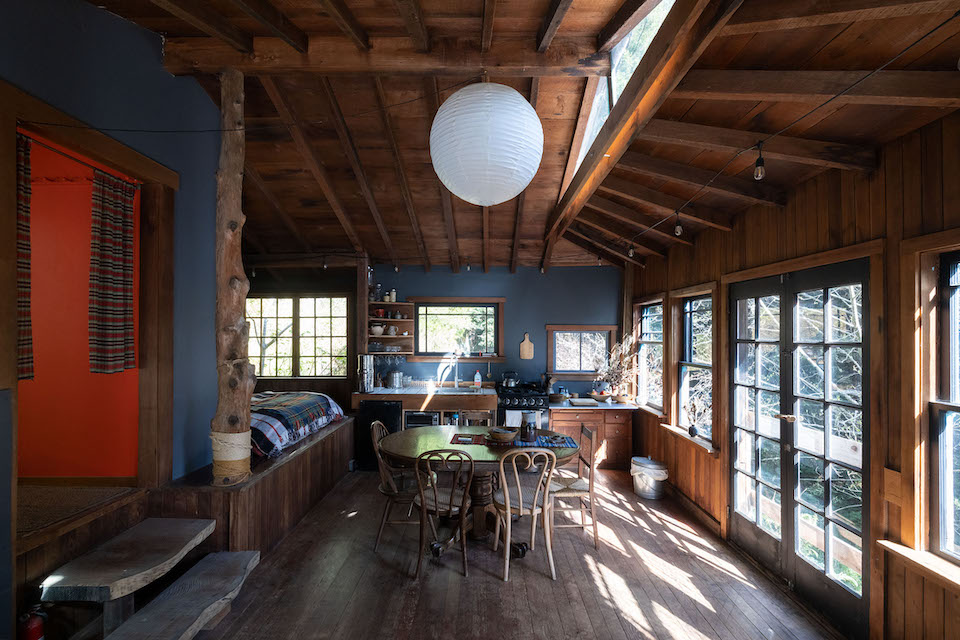 ‘Almost seven years ago I bought the Farm from thirteen shareholders, the original communards, and gradually just had friends, and friends of friends come stay, for free, help fixing things up. Gradually, over the course of the last few years, we fixed up the cabins and did some significant grading and the 2 acre significant open area for more gardens and orchards, and built a communal outdoor space, a dance deck and an outdoor kitchen, a green house. Now there’s wifi, there’s an infrastructure, there’s running hot water, bathrooms, outdoor outhouses and kitchens in al the cabins. My intention with the place was that there would be an extended community that would come and go. So it wasn’t full time residents but it wasn’t a revolving door of people coming and going all the time. I’ve hosted almost 2000 people since I’ve been here, and a lot of that was at the beginning, when there was a lot of rotation. I’ve tried to intentionally slow that down and have people coming and then coming back. That’s kind of the essence of the place, to create some sort of extended community.’ 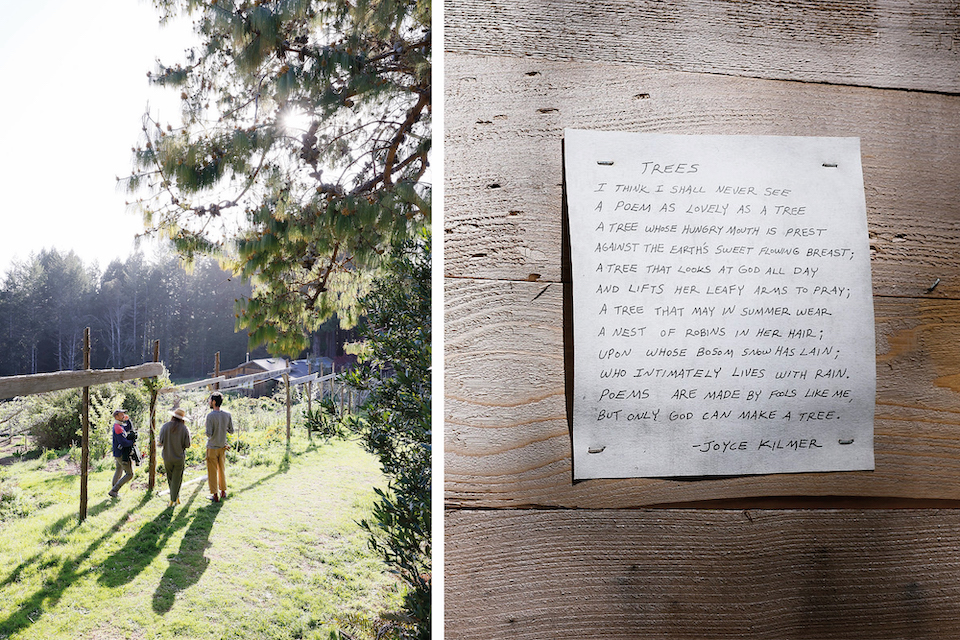 ‘I felt it immediately, a year ago, how precious it was to be here at a time of a pandemic. Especially at the beginning, when people were trapped in apartments and cities. This was such a beautiful place to be. It felt very strange actually, because all the cabins are spread out over the woods so it was possible to be here in a very free and open way. It was possible to totally forget about it. The place slowed down a lot.

I think in general there’s a sense of more rural space, wilderness, is more valued. It became a real sanctuary and refuge, during that time, when cities felt unsafe or claustrophobic. It will be interesting to see if we’ll just rore back. There’s always these cycles back and forth. A place like this isn’t for everyone. I have a few very good friends who are artists, for whom it’s just a little to rustic. Cabins isolated in the woods, with outhouses, staying warm by woodfire in winter, you really feel a part of the elements, you’re very much in it. And for some people that’s exactly what they’re looking for and for others…’ 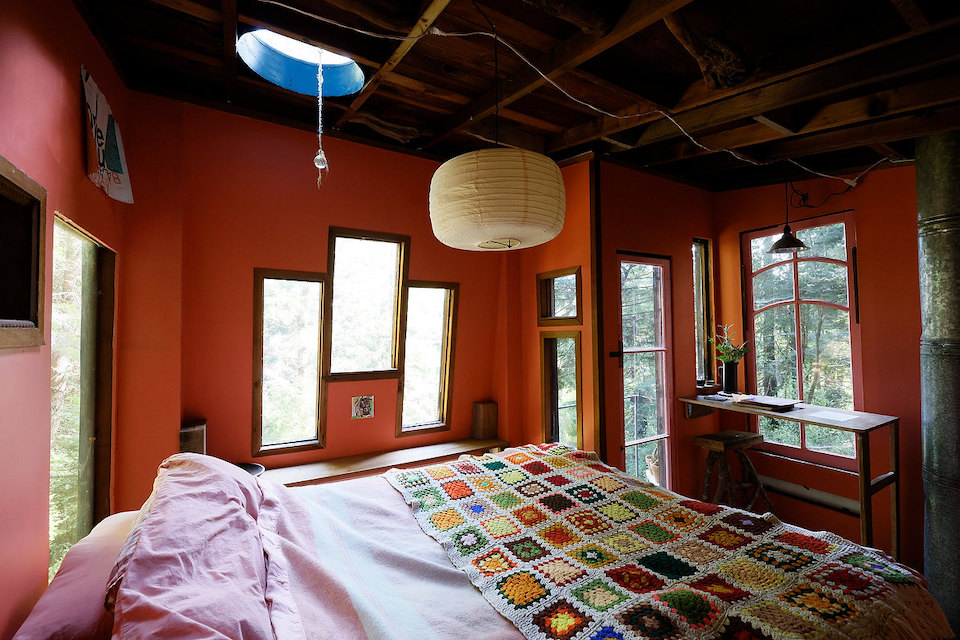 ‘Recently I was in Mexico City for three months, and it was an interesting experience being back in the city again. To see what that felt like. The biggest change was really physically, really my actual being. My body has changed here, the way I move, what I breath, what I eat and drink, my daily work, feels right. I’ve never felt more at home in my body, more correct in the way I was inhabiting a body. Gradually, over three months in the city, I could feel my body fall apart. It sounds stupid, but walking on concrete … immediately my knees fell apart, because I never walk on concrete anymore, probably haven’t in six years. And I could feel the air I was breathing in the city and the lack of the physical activity. I mean, here I’m physically active all day, doing manual labor all the time. I love the feeling of having a body engaged.

I remember one day I was sweeping the terrace and it felt so good just to sweep, the act of, not exercise, but just a body engaged with what it needs to do to take care of a place. The things I missed most, I feel like it’s almost like having a baby, is having this thing that you’re responsible for 24/7. I kind of thrive for that, that feeling of caring for something. Without that, I felt very at a loss. In the city you feel disconnected to all the systems, of food and water and air. I also know I need to leave my bubble on occasion and force myself to have experiences that I haven’t decided I’m going to have.’ 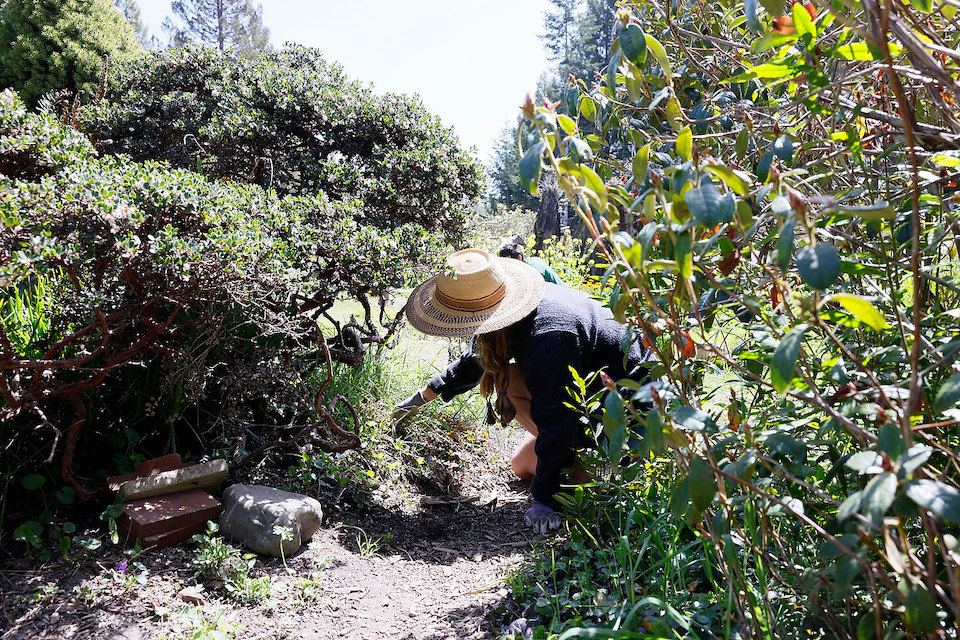 ‘I think there are basic values around living simply, resourcefully, and consciously, in the world today. Around an engagement with a piece of land over time. The original communards did a lot of work protecting water shed and reintroducing redwoods. They were very involved with and conscious of women’s liberation, gay liberation, environmental movements, civil rights, all of these things. To be on a piece of land that was built by hands and created by people who had certain values that you’re continuing, I think, it feels there’s something meaningful about that.

These cabins are very hand made. When you come in you feel like: I don’t think I’ve ever seen something like this. There’s a feeling of care, but also not preciousness or professionalism to it. Young people can come here and feel like: I could build something too, I could grow my own food if I wanted to, I could feel some sense of connection to the needs of my existence. You get down to some basic things about staying warm, staying fed, having shelter and a community.

But of course it’s a very rare bubble within a bubble, I think it’s important to be aware of. I’ve gone through great lengths with the entry of the parking lot to create a series of courtyards where you kind of leave your cars and your previous lives behind and you shut the gates and move through gardens and courtyards through which you feel that transition, the intention of leaving something behind and going into something else.’ 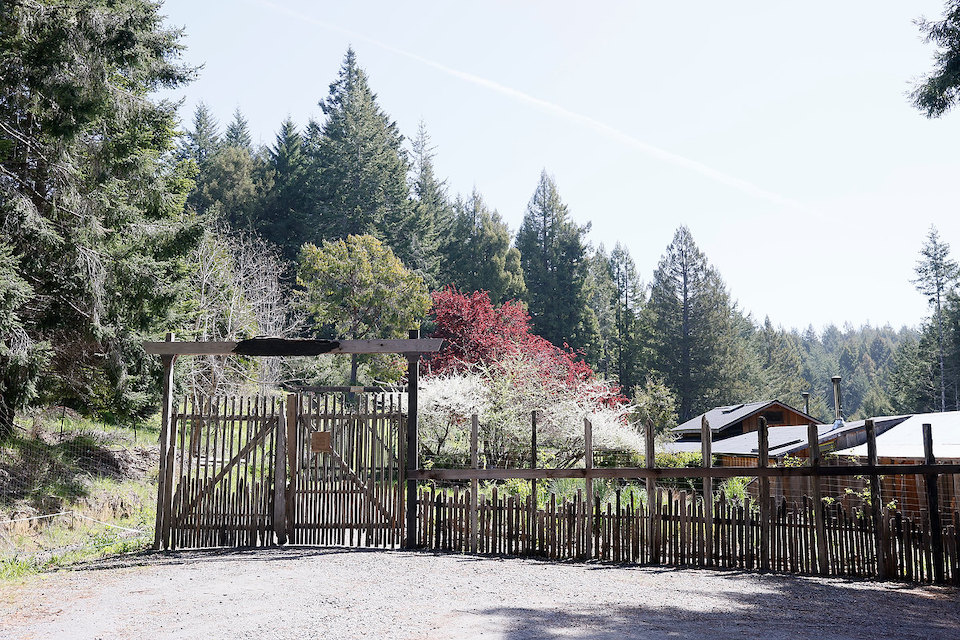 ‘It’s my hope that this place can always be predicated in this idea of involvement. Everyone on the land participates in what’s going on in the land. So if you’re eating in the garden then you’re helping in the garden. If you’re staying warm, you’re helping with the fire. There are flows of resources coming and going. It connects us to the land. I just want to slow down the movement of money. You know, slow down this flow of money. And for some reason it always escalates, there always needs to be more. It’s not like you have no money, but just to slow things down. To some degree people are taking care of themselves here, and the necessity to pay money or to raise money is lowered. People are taking more agency and feeling responsible for things than having to always pay other people to do things. I know that’s not for everywhere. But for his place, given the legacy of the farm, and the resourcefulness and engagement with the piece of land, I think that’s important.’ 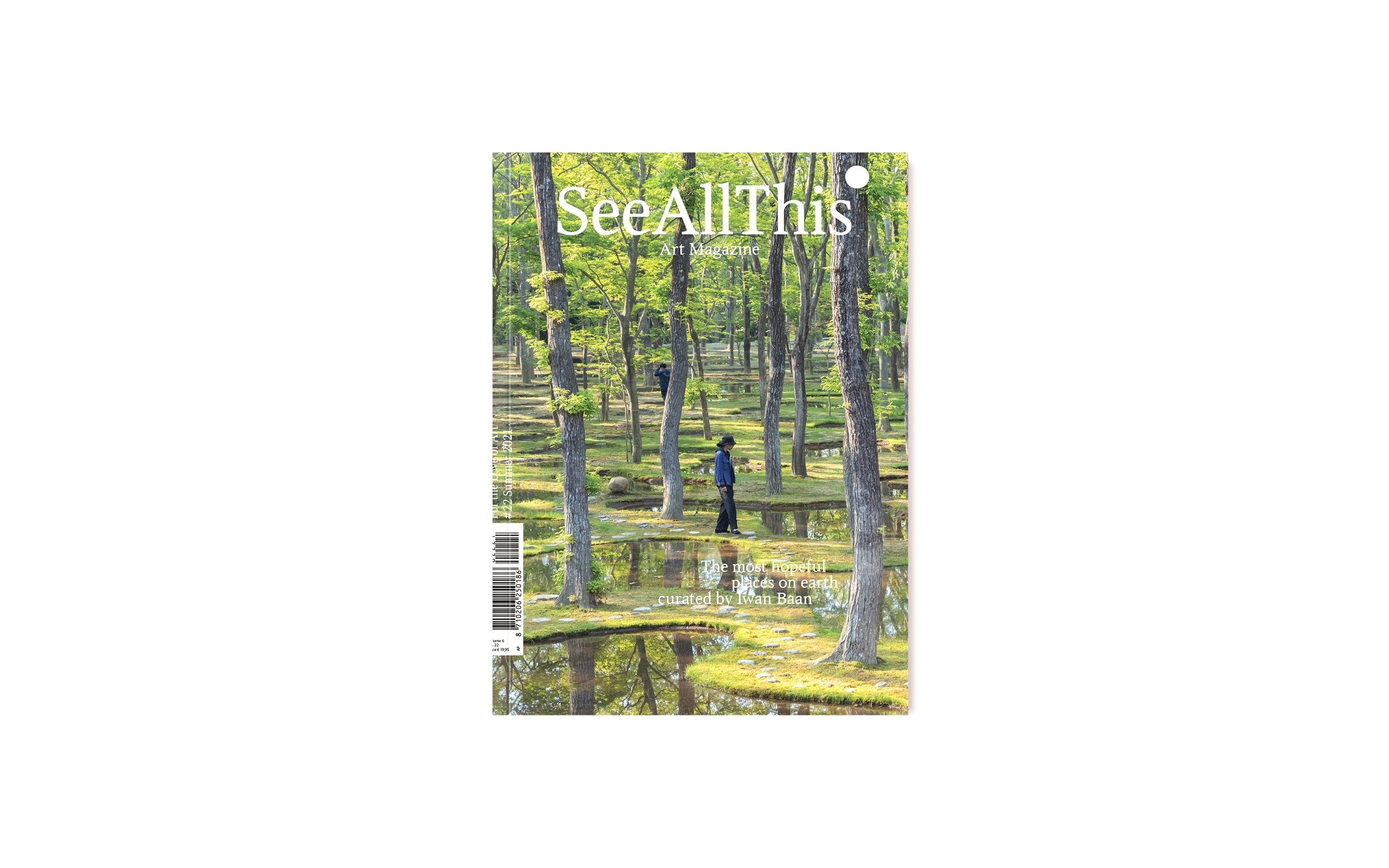